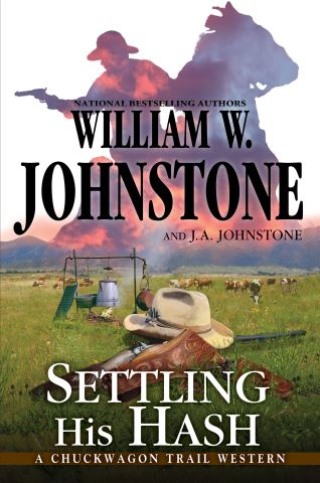 A chuckwagon cook who’s also deadly with a pair of six-shooters, Dewey “Mac” Mackenzie is a man who has no qualms filling men’s bellies with food—or lead. Finally cleared of a crime he didn’t commit, he’s able to enjoy the fruits of his labor on the trail without looking over his shoulder. But even his best served grub can be spoiled by those with evil appetites . . .

After traversing California from one end to the other, and finding nothing much to his liking, Mac Mackenzie is heeding his heart’s call to return to Texas. Lucky for him, a group of cowboys heading for the Lone Star state need someone who knows their way around a chuckwagon. Their previous cook’s temper boiled over during a saloon brawl and ended up in jail. With no love for the cook—or his food—the cowboys just want to head home peaceably, share some quality meals with good company, and give their boss the small fortune they’re carrying from the herd they sold.

Otis Bradley knows he’s no gourmet, but that’s no excuse for his fellow cattlemen to leave him rotting behind bars. He still earned his share of the payroll for this time on the trail—and after befriending outlaw Stack Ketchum, Otis has a gang of gunfighters ready to dish out some revenge in exchange for the loot. But Otis and Ketchum’s badmen haven’t reckoned with the likes of Mac, a man who will settle their hash—raw and bloody . . .