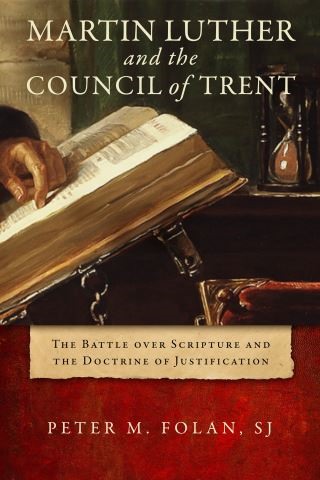 Martin Luther and the Council of Trent

The Battle over Scripture and the Doctrine of Justification

Seeking to understand the doctrine of justification by way of biblical hermeneutics, this book uncovers the differences between Martin Luther and the Council of Trent that set them on a collision course for conflict, and the church toward what has arguably been its most significant division in the West.

As Catholics and Lutherans continue to engage in dialogue about their shared faith and differing confessions, the need remains for a discerning study of the ways in which the Bible functioned in the Reformation’s central theological clash: the understanding and import of the doctrine of justification. Peter Folan’s incisive analysis in this volume fulfills that need. Through a careful reading of the debate’s most significant texts, he shows both how Martin Luther and the Council of Trent relied upon scripture to arrive at their respective formulations of the doctrine and how such seemingly divergent conclusions about the human person’s salvation in Christ could be grounded in the same sacred book.

This study begins with an examination of the key texts that Luther and his allies produced on justification and then turns to their Catholic respondents, whose work would ultimately inform the Council of Trent’s decree on the doctrine. By comparing precisely which texts both parties relied upon to articulate and defend their positions, Folan puts into sharp relief how infrequently both sides made use of the same biblical passages and, when they did avail themselves of the same passages, just how distinct their interpretive tendencies were. This book will be a critical addition to the libraries of scholars and students in Catholic and Lutheran biblical hermeneutics, Catholic-Lutheran dialogue, ecumenical studies, and church history.

Peter M. Folan, SJ, is an assistant professor in the Department of Theology and Religious Studies at Georgetown University.