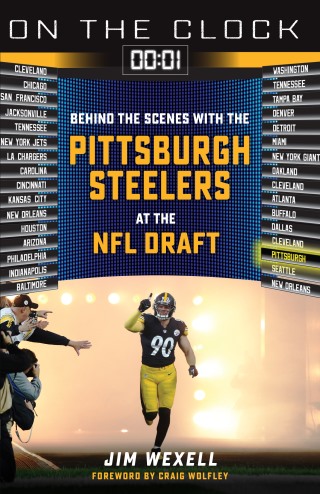 On the Clock: Pittsburgh Steelers

Behind the Scenes with the Pittsburgh Steelers at the NFL Draft

An insider history of the Pittsburgh Steelers at the NFL draft.

A singular, transcendent talent can change the fortunes of a football team instantly. Each year, NFL teams approach the draft with this knowledge, hoping that luck will be on their side and that their extensive scouting and analysis will pay off.

In On the Clock: Pittsburgh Steelers, Jim Wexell explores the fascinating, rollercoaster history of the Steelers at the draft, from Terry Bradshaw through Troy Polamalu and beyond.

Readers will go behind the scenes with top decision-makers as they evaluate, deliberate, and ultimately make the picks they hope will tip the fate of their franchise toward success.

From seemingly surefire first-rounders to surprising late selections, this is a must-read for Steelers faithful and NFL fans eager for a glimpse at how teams are built.

Jim Wexell: Jim Wexell graduated from the University of Pittsburgh in 1983 and worked as a Westmoreland County sportswriter for 15 years, including the last five years as sports editor. He founded SteelCityInsider, an interactive subscription site now managed by CBS Interactive, in 2001, and he covers the Steelers as publisher of that site. He is the author of four books: Tales from Behind the Steel Curtain, Men of Steel, Steeler Nation, and Polamalu.