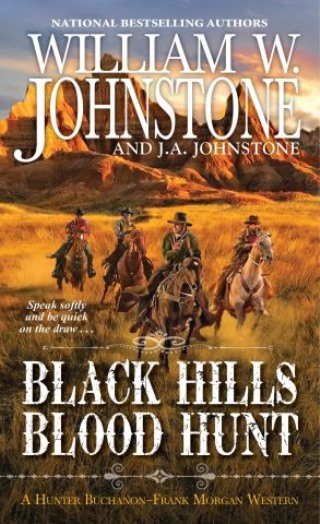 When President Theodore Roosevelt comes to Deadwood, the Greatest Western Writers of the 21st Century unite three of their most legendary heroes – Hunter Buchanon, Frank “The Last Gunfighter” Morgan, and his son, Conrad “The Loner” Morgan – from three of their most popular series for one monumental new series spin-off!

JOHNSTONE COUNTRY.
WHERE MEN LIVE BY THEIR WITS—OR DIE BY THEIR  IGNORANCE.

The President has come to Deadwood—and his enemies have come out of the woodwork—in an action-packed tale of vengeance and justice from national bestselling authors William W. Johnstone and J.A. Johnstone.

A HAIL OF BULLETS TO THE CHIEF

Deadwood, South Dakota. Miners flock there seeking fortunes, while cardsharps, bandits, and businessmen seek to deprive those who strike gold by means fair and foul. Legendary former lawman Seth Bullock plans to keep the peace by any means necessary—especially when his good friend, President Theodore Roosevelt, is expected in town to celebrate the anniversary of Deadwood’s founding.

Delayed in Washington, the President has sent his wife and children to the boomtown ahead of his arrival. But Ambrose Neill, a former New York City policeman jailed by Roosevelt for corruption, has kidnapped the President’s daughter. Backed by a gang of trigger-happy outlaws and supported by a ruthless senator, Neill plans to politically control the Commander-in-Chief before slaughtering him.

But what Neill and his cohorts don’t realize is that Roosevelt has gathered a deadly posse of rough riders including Bullock—and the legendary father-son gunfighters Frank and Conrad Morgan—who are more likely to bring the gang to justice dead than alive . . .