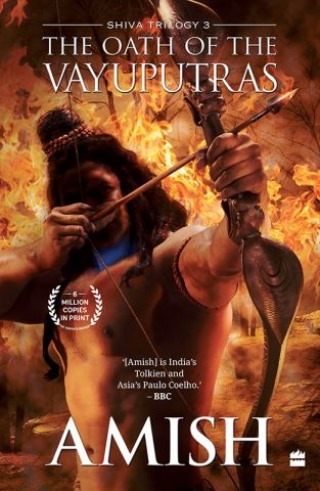 The Oath Of The Vayuputras (Shiva Trilogy Book 3)

ONLY A GOD CAN STOP IT.

Shiva is gathering his forces. He reaches the Naga capital, Panchavati, and Evil is finally revealed. The Neelkanth prepares for a holy war against his true enemy, a man whose name instils dread in the fiercest of warriors.

India convulses under the onslaught of a series of brutal battles. It's a war for the very soul of the nation. Many will die. But Shiva must not fail, no matter what the cost. In his desperation, he reaches out to the ones who have never offered any help to him: the Vayuputras.

Will he succeed? And what will be the real cost of battling Evil? To India? And to Shiva's soul?

Discover the answer to these mysteries in this concluding part of the bestselling Shiva Trilogy.

Amish Tripathi:
Amish is a 1974-born, IIM (Kolkata)-educated banker-turned-author. The success of his debut book, The Immortals of Meluha (Book 1 of the Shiva Trilogy), encouraged him to give up his career in financial services to focus on writing. Besides being an author, he is also an Indian-government diplomat, a host for TV documentaries, and a film producer.
Amish is passionate about history, mythology and philosophy, finding beauty and meaning in all world religions. His books have sold more than 6 million copies and have been translated into over 20 languages. His Shiva Trilogy is the fastest selling and his Ram Chandra Series the second fastest selling book series in Indian publishing history. You can connect with Amish here:
• www.facebook.com/authoramish
• www.instagram.com/authoramish
• www.twitter.com/authoramish