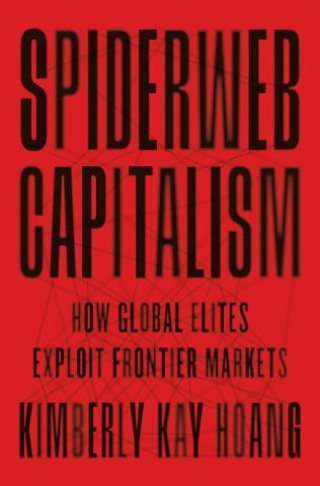 In 2015, the anonymous leak of the Panama Papers brought to light millions of financial and legal documents exposing how the superrich hide their money using complex webs of offshore vehicles. Spiderweb Capitalism takes you inside this shadow economy, uncovering the mechanics behind the invisible, mundane networks of lawyers, accountants, company secretaries, and fixers who facilitate the illicit movement of wealth across borders and around the globe.

Kimberly Kay Hoang traveled more than 350,000 miles and conducted hundreds of in-depth interviews with private wealth managers, fund managers, entrepreneurs, C-suite executives, bankers, auditors, and other financial professionals. She traces the flow of capital from offshore funds in places like the Cayman Islands, Samoa, and Panama to special-purpose vehicles and holding companies in Singapore and Hong Kong, and how it finds its way into risky markets onshore in Vietnam and Myanmar. Hoang reveals the strategies behind spiderweb capitalism and examines the moral dilemmas of making money in legal, financial, and political gray zones.

Dazzlingly written, Spiderweb Capitalism sheds critical light on how global elites capitalize on risky frontier markets, and deepens our understanding of the paradoxical ways in which global economic growth is sustained through states where the line separating the legal from the corrupt is not always clear.

Kimberly Kay Hoang: Kimberly Kay Hoang is associate professor of sociology at the University of Chicago. She is the author of Dealing in Desire: Asian Ascendancy, Western Decline, and the Hidden Currencies of Global Sex Work. She lives in Chicago. Twitter @kimberlykhoang