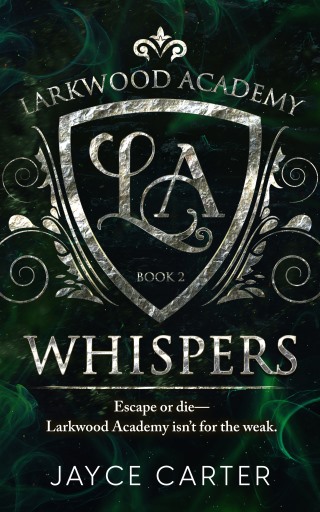 Escape or die—Larkwood Academy isn't for the weak.

When I first arrived at Larkwood Academy, I was sure someone would rescue me. After months here at the mercy of the guards, the other residents and even the warden, I've realized the only person who can save me is myself.

In order to escape, I've teamed up with three other shades—Wade, a young and carefree void, Knox, an incubus afraid of his own powers and Brax, a berserker who seems to hate me as much as he wants me. Meanwhile, we have to hide our plans from Deacon, a guard who isn't quite human or shade, and Kit, an adjunct professor with a terrifying power and far too much connection to the warden.

Even as I uncover the truths behind the secretive and dangerous North Tower, as the warden takes an ever-increasing interest in me and my powers and as I search desperately for a way out, I realize I'm out of options.

Jayce Carter: Jayce Carter lives in Southern California with her husband and two spawns. She originally wanted to take over the world but realized that would require wearing pants. This led her to choosing writing, a completely pants-free occupation. She has a fear of heights yet rock climbs for fun and enjoys making up excuses for not going out and socializing.