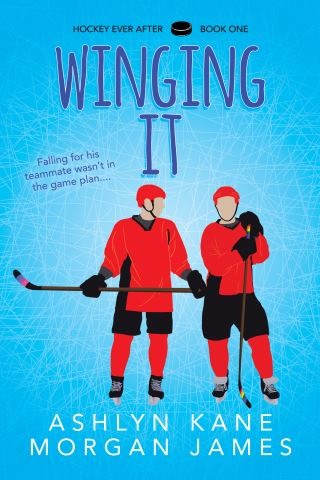 Hockey is Gabe Martin's life. Dante Baltierra just wants to have some fun on his way to the Hockey Hall of Fame. Falling for a teammate isn't in either game plan.

When Gabe gets outed, it turns his careful life upside-down. The chaos messes with his game and sends his team headlong into a losing streak. The last person he expects to pull him through it is Dante.

This season isn’t going the way Dante thought it would. Gabe’s sexuality doesn’t faze him, but his own does. Dante’s always been a “what you see is what you get” kind of guy, and having to hide his attraction to Gabe sucks. But so does losing, and his teammate needs him, so he puts in the effort to snap Gabe out of his funk.

He doesn’t mean to fall in love with the guy.

Getting involved with a teammate is a bad idea, but Dante is shameless, funny, and brilliant at hockey. Gabe can’t resist. Unfortunately, he struggles to share part of himself that he’s hidden for years, and Dante chafes at hiding their relationship. Can they find their feet before the ice slips out from under them?

Winging It is the first book in the hot, hilarious, heartfelt Hockey Ever After series. If you like witty banter, friends to lovers, and sports romance, you’ll love Winging It.

Ashlyn Kane likes to think she can do it all, but her follow-through often proves her undoing. Her house is as full of half-finished projects as her writing folder. With the help of her ADHD meds, she gets by.

An early reader and talker, Ashlyn has always had a flare for language and storytelling. As an eight-year-old, she attended her first writers’ workshop. As a teenager, she won an amateur poetry competition. As an adult, she received a starred review in Publishers Weekly for her novel Fake Dating the Prince. There were quite a few years in the middle there, but who’s counting?

Her hobbies include DIY home decor, container gardening (no pulling weeds), music, and spending time with her enormous chocolate lapdog. She is the fortunate wife of a wonderful man, the daughter of two sets of great parents, and the proud older sister/sister-in-law of the world’s biggest nerds.

Morgan James is a clueless (older) millennial who’s still trying to figure out what they’ll be when they grow up and enjoying the journey to get there. Now, with a couple of degrees, a few stints in Europe, and more than one false start to a career, they eagerly wait to see what’s next. James started writing fiction before they could spell and wrote their first (unpublished) novel in middle school. They haven’t stopped since. Geek, artist, archer, and fanatic, Morgan passes their free hours in imaginary worlds, with people on pages and screens—it’s an addiction, as is their love of coffee and tea. They live in Canada with their massive collection of unread books and where they are the personal servant of too many four-legged creatures.