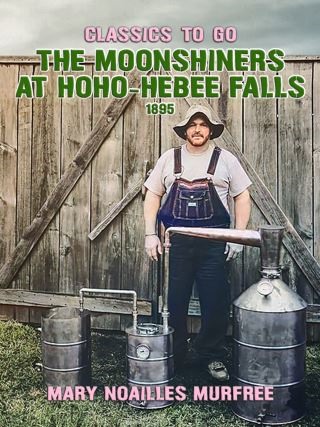 The Moonshiners at Hoho-Hebee Falls

Excerpt: "If the mission of the little school-house in Holly Cove was to impress upon the youthful mind a comprehension and appreciation of the eternal verities of nature, its site could hardly have been better chosen. All along the eastern horizon deployed the endless files of the Great Smoky Mountains—blue and sunlit, with now and again the apparition of an unfamiliar peak, hovering like a straggler in the far-distant rear, and made visible for the nonce by some exceptional clarification of the atmosphere; or lowering, gray, stern; or with ranks of clouds hanging on their flanks, while all the artillery of heaven whirled about them, and the whole world quaked beneath the flash and roar of its volleys. The seasons successively painted the great landscape—spring, with its timorous touch, its illumined haze, its tender, tentative green and gray and yellow; summer, with its flush of completion, its deep, luscious, definite verdure, and the golden richness of fruition; autumn, with a full brush and all chromatic splendors; winter, in melancholy sepia tones, black and brown and many sad variations of the pallors of white. So high was the little structure on the side of a transverse ridge that it commanded a vast field of sky above the wooded ranges; and in the immediate foreground, down between the slopes which were cleft to the heart, was the river, resplendent with the reflected moods of the heavens. In this deep gorge the winds and the pines chanted like a Greek chorus; the waves continuously murmured an intricate rune, as if conning it by frequent repetition; a bird would call out from the upper air some joyous apothegm in a language which no creature of the earth has learned enough of happiness to translate."

Mary Noailles Murfree: Mary Noailles Murfree (January 24, 1850 – July 31, 1922) was an American fiction writer of novels and short stories who wrote under the pen name Charles Egbert Craddock. She is considered by many to be Appalachia's first significant female writer and her work a necessity for the study of Appalachian literature, although a number of characters in her work reinforce negative stereotypes about the region. She has been favorably compared to Bret Harte and Sarah Orne Jewett, creating post-Civil War American local-color literature.