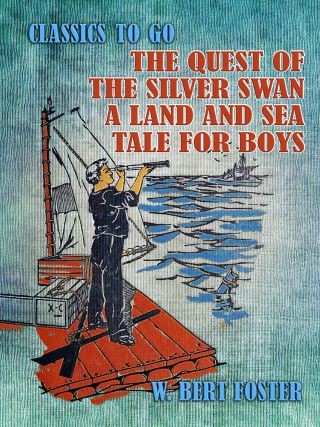 Excerpt: "The sun, whose upper edge had just appeared above the horizon, cast its first red beams aslant a deserted wilderness of heaving billows. Here and there a flying fish, spurning its usual element, cut the air like a swift ray of light, falling back into the sea again after its short flight with a splash that sent myriad drops flashing in the sunlight. There were not a few triangular objects, dark in color, and looking like tiny sails, darting along the surface of the sea, first in this direction and then in that. There was a peculiar sinister motion to these fleshy sails, an appearance to make the beholder shudder involuntarily; for these objects were the dorsal fins of sharks, and there is nothing more bloodthirsty and cruel than these “tigers of the sea.” It was quite noticeable that these monsters had gathered about an object which, in comparison with the vast expanse of sea and sky, was but a speck. It labored heavily upon the surface of the sea, and seemed to possess a great attraction for the sharks."

W. Bert Foster: Walter Bertram Foster, (1869-1929) US author who specialized in the Dime Novel and several of whose Western tales were made into silent films; his sf of most interest – like "At Land's End" (May-November 1901 Argosy), a Near Future tale in which the Arctic is explored by airplane; and "When Time Slipped a Cog" (January-May 1905 All-Story), which combines Timeslip and Amnesia – did not reach book form. The Lost Expedition (1905) is borderline science fiction.