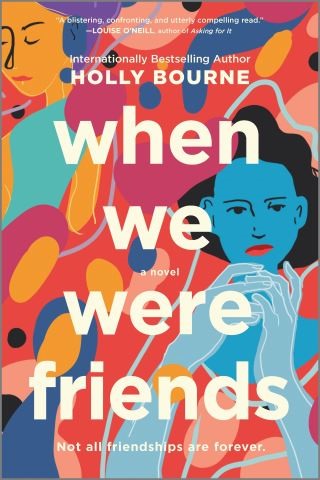 When We Were Friends

“Holly Bourne’s unique voice immediately invites you in and you can't look away. Gritty, funny and poignant.” —Beth O'Leary, author of The Flatshare

In this darkly funny novel, two women reunite after a decade of estrangement, only to confront the forces that destroyed their friendship in the first place.

From the day they first meet as teenagers, Fern and Jessica are best friends. Despite their differences, they are there for each other throughout everything, navigating the difficulties of growing up and fitting in. That is, until Jessica crosses a line that Fern can’t forgive.

A lot has changed for them both—but can their relationship be different now that they are older? Is it possible for either of them to rewrite the roles they've been cast in? Or will their shared history ultimately be doomed to repeat itself again?

Set between the present day and the early ’00s, When We Were Friends is a blisteringly funny and devastating novel: both a joyful celebration of female friendship and a razor-sharp look at the damage we can all cause to those we claim to love the most.

Holly Bourne: Holly Bourne is a UK bestselling author and Ambassador for Women's Aid. Inspired by her work with young people, and her own experiences of everyday sexism, Holly is a passionate mental health advocate and proud feminist. She lives in London, but dreams of the day she has a garden, dog, chickens, and a bee hive. Pretending is her US debut.