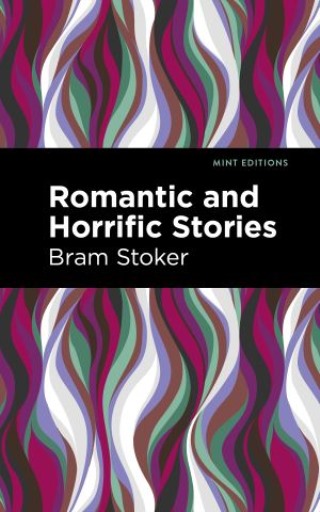 Romantic and Horrific Stories (2021) is a collection of short fiction by Bram Stoker. Although he is largely remembered as the author of Dracula (1897), one of the greatest horror novels of all time, Stoker was a versatile writer whose gift for transmitting terror is matched by his ability to craft convincing and moving tales of love.

“The Crystal Cup,” first published in London Society in 1872, is the story of an artist who is forced to create a flawless crystal vase for the king. Having left his wife and home behind, he suffers under a series of constraints and grueling demands. “The Chain of Destiny” is a bestselling epistolary tale featuring hypnotism, magic, and supernatural elements that first appeared in The Shamrock in 1875. In Stoker’s 1898 tale “Bengal Roses,” A teenager from the country falls for a beautiful young woman, but soon discovers she loves an older cavalry officer. First published in Lloyd’s Weekly Newspaper in 1899, “A Yellow Duster” is the story of two old men whose lifelong friendship is threatened by a mysterious secret. Curious about a dust rag found in his friend’s display case, the story’s protagonist asks the collector of rare and priceless objects why he has preserved something so seemingly worthless.

Other stories collected herein include “Our New House,” published in the Boston Herald in 1895, as well as “The Burial of the Rats” and “A Dream of Red Hands,” both of which appeared in Dracula’s Guest and Other Stories (1914). Romantic and Horrific Stories compiles a dozen works of short fiction by Bram Stoker, the secretive and vastly underrated creator of Dracula, one of history’s greatest villains. With a beautifully designed cover and professionally typeset manuscript, this edition of Bram Stoker’s Romantic and Horrific Stories is a classic of Irish literature reimagined for modern readers.

Bram Stoker (1847-1912) was an Irish novelist. Born in Dublin, Stoker suffered from an unknown illness as a young boy before entering school at the age of seven. He would later remark that the time he spent bedridden enabled him to cultivate his imagination, contributing to his later success as a writer. He attended Trinity College, Dublin from 1864, graduating with a BA before returning to obtain an MA in 1875. After university, he worked as a theatre critic, writing a positive review of acclaimed Victorian actor Henry Irving’s production of Hamlet that would spark a lifelong friendship and working relationship between them. In 1878, Stoker married Florence Balcombe before moving to London, where he would work for the next 27 years as business manager of Irving’s influential Lyceum Theatre. Between his work in London and travels abroad with Irving, Stoker befriended such artists as Oscar Wilde, Walt Whitman, Hall Caine, James Abbott McNeill Whistler, and Sir Arthur Conan Doyle. In 1895, having published several works of fiction and nonfiction, Stoker began writing his masterpiece Dracula (1897) while vacationing at the Kilmarnock Arms Hotel in Cruden Bay, Scotland. Stoker continued to write fiction for the rest of his life, achieving moderate success as a novelist. Known more for his association with London theatre during his life, his reputation as an artist has grown since his death, aided in part by film and television adaptations of Dracula, the enduring popularity of the horror genre, and abundant interest in his work from readers and scholars around the world.