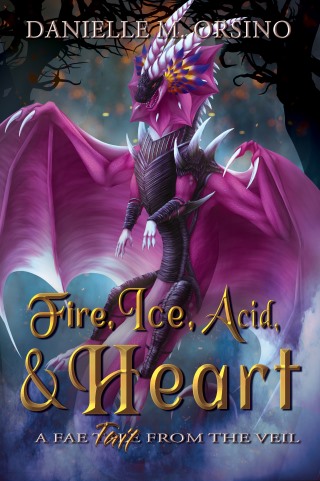 Where is your honor? Where is your heart?
Dark Fae soldier Jennara and her Fire-Breather, Kali, have endured months of training for the Tournament of Fire, Ice, and Acid. Each cycle, the Dark Fae compete with their dragons to determine who will be promoted to the elite fighting forces. Five nominees are chosen, followed by a day of battles in which the last pair standing fights an elite dragon and rider of Chief Dragor's choosing.
For centuries, the tournament in Blood Haven has been one of honor and respect, but this cycle goes wrong when High Council Guard Yagora severs tradition and deliberately excludes Jennara and Kali. Elder Fae guard, Azrael, intervenes, hoping to keep the tournament ethical. But Azrael has much to learn about what is really going on inside the walls of Blood Haven.
As Jennara and Kali battle for their place in the Tournament of Fire, will they instead end up fighting for their lives?

Danielle M. Orsino: Danielle M. Orsino — destined to be a writer from a young age — was working as a nurse, treating a patient who needed some distractions during long treatment sessions, when inspiration struck. Orsino reached back to a forgotten skill, a childhood dream. From a young age, she had wanted to be a writer, so she decided to tell her patient a story. Little did she know a seed was planted that day; a seed that would grow into a fantastically epic adventure of heartbreak, hope, and rebirth: Birth of the Fae: Locked Out of Heaven. Drawing from her passion for comic books, cosplay, and the fantasy genre, along with her martial arts expertise, Orsino brings forth an electric and hopeful book debut. She is taking on her biggest challenge to date — a story born from the long treatment sessions with a patient, and building it into a fantasy book series, Birth of the Fae. ​ Expanding on her love of writing and comics, and exploring the world of fantasy novels, she delves into the realm of fairies, retelling their origins from a completely new perspective.