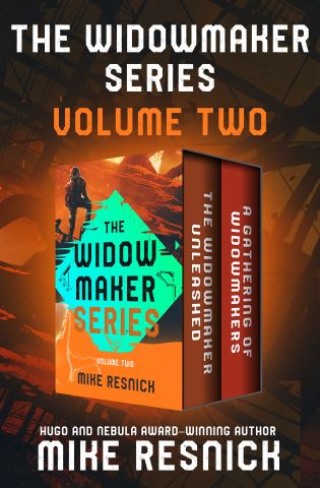 The Widowmaker Unleashed * A Gathering of Widowmakers

Retirement is a dangerous game for a cloned bounty hunter, in the third and fourth books in the series featuring Jefferson Nighthawk.

The Widowmaker Unleashed
After more than a century in deep freeze, Jefferson Nighthawk is waking up from his sleep, finally cured of the disease that almost killed him. The sixty-two-year-old wants to settle down—easier said than done when the enemies of his clones still have scores to settle . . .

A Gathering of Widowmakers
He may be retired from bounty hunting, but Nighthawk is still one of the three most dangerous men alive. The other two? His clones. But when the youngest one makes a nearly fatal mistake, he’ll have to learn to match wits with both of the killers who came before him.

“Resnick is thought-provoking, imaginative . . . and above all galactically grand.” —Los Angeles Times

Mike Resnick (1942–2020) was an American science fiction author and editor. A winner of five Hugo Awards and a Nebula Award, Resnick was hugely popular in the world of fandom and was the guest of honor at many science fiction conventions, including Chicon 7, the World Science Fiction Convention in Chicago. He was the executive editor of Jim Baen's Universe, as well as the editor and co-creator of Galaxy’s Edge magazine. In addition to publishing hundreds of books, Resnick was known for helping new writers start their careers. The Mike Resnick Memorial Award was created in 2021 to honor his memory and carry on his legacy by spotlighting new writers of short fiction in the genre.