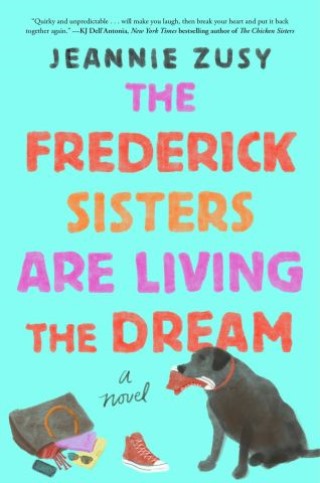 The Frederick Sisters Are Living the Dream

Eleanor Oliphant Is Completely Fine meets Early Morning Riser with a dash of Where’d You Go, Bernadette in this very funny, occasionally romantic, and surprisingly moving novel about how one woman’s life is turned upside down when she becomes caregiver to her sister with special needs.

Every family has its fault lines, and when Maggie gets a call from the ER in Maryland where her older sister lives, the cracks start to appear. Ginny, her sugar-loving and diabetic older sister with intellectual disabilities, has overdosed on strawberry Jell-O.

Maggie knows Ginny really can’t live on her own, so she brings her sister and her occasionally vicious dog to live near her in upstate New York. Their other sister, Betsy, is against the idea but as a professional surfer, she is conveniently thousands of miles away.

Jeannie Zusy: Jeannie Zusy has written several full-length plays, screenplays, short stories, and works of fiction. Her work has been performed off-Broadway and beyond and appeared in McSweeney’s. The Frederick Sisters Are Living the Dream is her first novel.