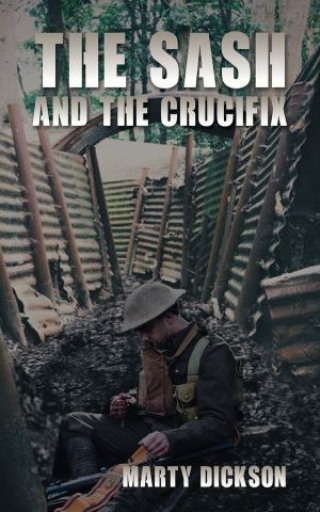 The Sash and the Crucifix

Lance-Corporal Edward Vickers, was born on the 12th July 1900, in the Tigers Bay area of Belfast, under the shadow of Harland and Wolff Shipyard. Edward and his four friends watched some of the greatest ships ever to be built, as they towered over their streets. These five friends made a playground out of the shipyard and got to play on the decks of the greatest ship ever built, The Titanic. As they got older, WW1 shattered their lives like countless others. What they had to endure was hard to comprehend, but this first hand story had to be told. Not only was his story about WW1, but WW2 as well, where he had to fight his way through Belgium and France yet again, to get to the Dunkirk beaches.
Through his life he had some unforgettable ups, but they were overshadowed by unthinkable downs.
Edwards’s story is a remarkable one; of life through the wars, abroad and at home, and it’s a story that spans 105 years of his remarkable life.

Marty Dickson: Marty Dickson was born in a small market village called Sixmilecross, in the county of Tyrone, Northern Ireland and spent all of his youth living there. He started to write music at the age of fifteen and played his first live gig at the age of seventeen in the local farmers club. His love for rock music and motorcycles was to become his passion in life. In 1987, he moved to Cambridge with his then-girlfriend, Elaine, whom he married ten years later. He played bass guitar in numerous bands over the years, spending most of his time on the road touring or in a studio, waiting and recording music. He also became a keen restorer of old motorcycles, which he owned to his father, Cecil Dickon, an ex-road racer and a restorer himself. In 2015, he decided to give up on the constant touring and turned to writing books. His first book was released in 2018 through Austin Maculey Publishers, All for the Love of a Father. He has never forgotten his hometown and writes passionately about his love for it. In this second novel, Sixmilescross has yet again played a role in it.