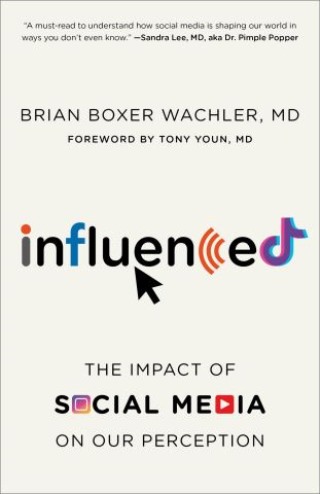 The Impact of Social Media on Our Perception

“This engaging, eye-opening book covers everything anyone would ever want to know about social media influencers." —Booklist, Starred Review

Unpacks and pulls the curtain back on what happens to our brains and our behaviors each time we addictively engage social media and the influencers we encounter there.

Individuals seeking to widen their tribes of friends, fans, and followers have an abundance of resources for building their digital footprints and social media popularity. All of this seems well and good from the perspective of revenue, exposure, and perhaps ego-building, but what is the impact of this on the human brain and our behavior? Is anyone paying attention to the lurking side effects of the social media influencer revolution?

As “Dr. Brian” Boxer Wachler—one of the world’s most esteemed authorities on human perception—reveals in Influenced: The Impact of Social Media on Our Perception, we are oblivious to the mental evolution that is already in process. Science is proving that our addictive reliance upon social media and its influencers is having a demonstrable impact on how we think, feel, and perceive everything around us— and even how we react to stimuli. One might think that a “Like” is nothing more than a split-second tap on a device. However, brain scans tell a different story. Our brains literally light up with every buzz, ding, alert, and ring in anticipation of how our network is responding to us. As we tap away at our devices, we anxiously seek the approval of others—often people we don’t know.

Influenced unpacks what happens to our brains and our behaviors each time we click “Like”; follow an influencer; consume a video; share or reshare an article; post or repost a photograph; write a comment; pile on a trend;; just scroll for new content; and why do we keep coming back for more. Dr. Boxer Wachler includes his own social and medical findings and highlights them with interviews with top influencers, the latest studies, and pop-culture anecdotes.

Brian Boxer Wachler, MD, has devoted his career to the physical and mental intersection of how we perceive ourselves and the world around us. As the medical director of his eponymous institute in Beverly Hills and a staff physician at the famed Cedars-Sinai Medical Center, he is one of the most sought-after surgeons in the world. Dr. Boxer Wachler has patented treatments, set industry guidelines, investigated procedures for the FDA, written numerous articles, and authored four medical books read by hundreds of thousands. He has been featured by Vogue, The New York Times, Time, TEDx, and various national morning shows, including performing surgery live on The Today Show. He is a featured expert on The Doctors. Dr. Boxer Wachler lives in Los Angeles with his wife and twin teenage daughters