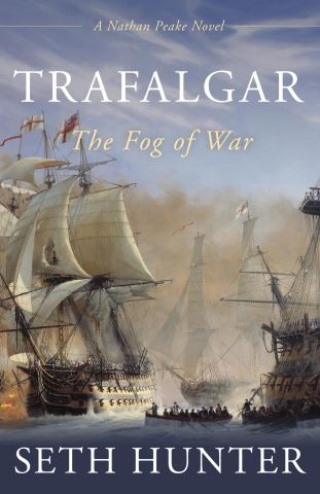 The Fog of War

“All I need is three days of fog,” Napoleon told his admirals, and they would have his greatest enemy at their mercy and the world at his feet.

It is 1803, and Britain and France are on the eve of war. Captain Nathan Peake, still in command of the sloop Falaise, is recruited to coordinate a secret operation to land agents and weapons on the coast of Brittany and Normandy to raise the flag of rebellion. Instead, he discovers that the real plan is to kidnap or assassinate Napoleon on the road to his country home of Malmaison on the outskirts of Paris. As Peake navigates the conspiracy and its aftermath, he finds his paths crossing with those of the legendary Sir Sidney Smith, American inventor Robert Fulton, and the Empress Josephine. But as the fog of war thickens, the risk of a chance encounter with someone who knows Peake’s true identity also grows. And all the while Napoleon is strategizing to divide his enemy and concentrate his forces on the weakest link. It has worked for the general many times on land—but will it now work at sea?

This is the story of the murders and intrigues, the myths and mysteries—and crucially the naval encounters—that preceded the most famous battle in nautical history. This is Nathan Peake’s Trafalgar, the true story of the events leading up to the campaign.

Seth Hunter: Seth Hunter is the pseudonym of London-based Paul Bryers, the author of the highly acclaimed Nathan Peake Novels, a series of naval adventures set against the canvas of the French Revolution and Napoleonic Wars. One of his children’s stories, In a Pig's Ear, was named as one of the Guardian's six best novels of the year. He has written and directed many historical dramas for British television, radio, and the theatre.