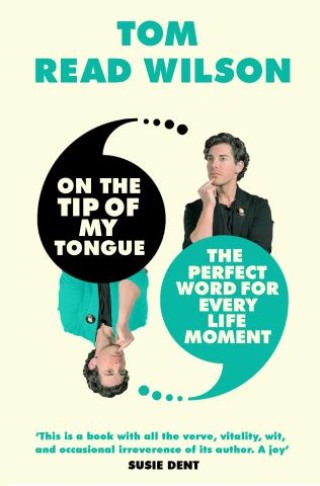 On the Tip of My Tongue

The perfect word for every life moment

In On the Tip of My Tongue, logophile and television star Tom Read Wilson takes a delicious dive into the etymology and usage of words, euphemisms and bon mots.

Written with his trademark sparkling wit, the star of Celebs Go Dating and self-avowed word-lover presents a hilarious and fascinating guide which aims to leave you never lost for words again.

Divided into sections spanning dating, personal development, show business, compliments, curses, and how to dodge offence while speaking your mind, this book will equip you with the words needed to navigate all the situations of modern life with style and grace.

From treppenwitz (the German word for the feeling of a missed riposte in an argument) to Callipygian (a 17th Century word referring to someone with well shaped buttocks) to JOMO (the Joy of Missing Out), this guide covers a wide and varied range of words, from those with roots in antiquity to new ones being coined in the present day.

With Tom’s wit and lifelong love of words by your side, you'll always be able to pick the perfect word, phrase or quip, whether you are trying to understand the many metaphors for sex or trying to tell your mother you love her.

This is a delightful and hilarious etymological solution to the dilemmas and conundrums of modern life and a must-read for every budding vocabularian.

Tom Read Wilson: Tom Read Wilson is a TV presenter, actor, and singer. After graduating from the Royal Academy of Music in 2011, where he studied Musical Theatre and performed in plays and musicals all over the world, Tom stole the nation's hearts as the hilarious receptionist on Celebs Go Dating. Tom continues to be a regular on our TV screens, among other things, having won Celebrity Mastermind (BBC1), placed 2nd on Celebrity Best Home Cook (BBC1), and appearing on a multitude of shows such as The Wheel (BBC1), 8 out of 10 Cats (Ch4), and Celebrity Juice (ITV). Aside from professional pursuits, supporting the Arts and green initiatives is a great passion for Tom; he is an active campaigner for Wildwood and The Kent Wildlife Trust, as well as an Ambassador for Acting For Others. Tom is a devout logophile who hosts a regular podcast Tom Read Wilson has words with… and has been posting his Word of Day videos since 2016. Find Tom on Twitter and Instagram @TomReadWilson.