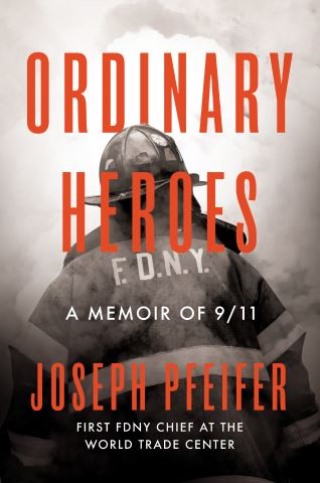 From the first FDNY chief to respond to the 9/11 attacks, an intimate memoir and a tribute to those who died that others might live

When Chief Joe Pfeifer led his firefighters to investigate an odor of gas in downtown Manhattan on the morning of 9/11, he had no idea that his life was about to change forever. A few moments later, he watched as the first plane crashed into the World Trade Center. Pfeifer, the closest FDNY chief to the scene, spearheaded rescue efforts on one of the darkest days in American history.

Ordinary Heroes is the unforgettable and intimate account of what Chief Pfeifer witnessed at Ground Zero, on that day and the days that followed. Through his eyes, we see the horror of the attack and the courage of the firefighters who ran into the burning towers to save others. We see him send his own brother up the stairs of the North Tower, never to return. And we walk with him and his fellow firefighters through weeks of rescue efforts and months of numbing grief, as they wrestle with the real meaning of heroism and leadership.

This gripping narrative gives way to resiliency and a determination that permanently reshapes Pfeifer, his fellow firefighters, NYC, and America. Ordinary Heroes takes us on a journey that turns traumatic memories into hope, so we can make good on our promise to never forget 9/11.

Joseph Pfeifer: Joseph Pfeifer retired from the New York City Fire Department in 2018 as an assistant chief and the founding director of FDNY’s Center for Terrorism and Disaster Preparedness. During his thirty-seven-year career, he commanded some of the most significant emergencies in New York City’s history, including the World Trade Center attacks on September 11, 2001, the Superstorm Sandy fire in 2012, and the Ebola crisis in 2014. Pfeifer is currently a senior fellow at the Harvard Kennedy School and the Combating Terrorism Center at West Point, and the director for crisis leadership at the National Center for Disaster Preparedness at Columbia University. He holds master’s degrees from the Harvard Kennedy School, the Naval Postgraduate School, and the Immaculate Conception seminary. Joe lives in New York with his wife, Ginny.