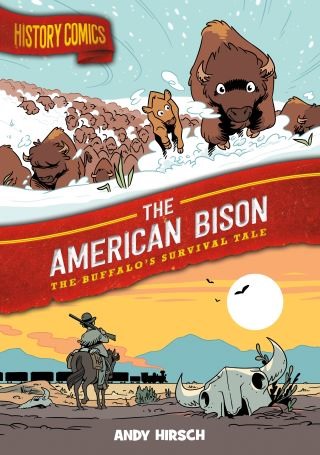 Turn back the clock with History Comics, First Second's new nonfiction graphic novel series! In History Comics: The American Bison, learn how millions of buffalo once roamed the American prairie—until they were nearly driven to extinction.

In the early 18th century the American prairies shook under the hooves of nearly 30 million bison. Fast as a horse, tall as a person, and heavier than both combined, they roamed from coast to coast. A century later, people struggled to find a single one left alive. How did the great herds disappear, and what will it take to bring them back?

Andy Hirsch is a cartoonist living in Dallas, Texas. He is the author and illustrator of several entries in First Second's Science Comics series, including Dogs: From Predator to Protector, Trees: Kings of the Forest, and Cats: Nature and Nurture.