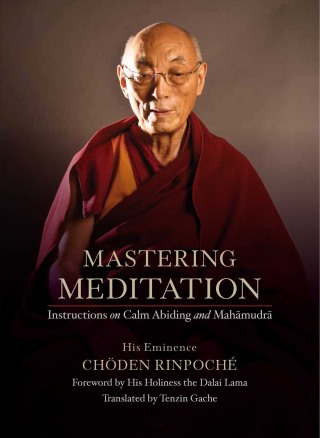 Instructions on Calm Abiding and Mahamudra

A legendary contemporary meditation master illuminates practices that are essential to Tibetan Buddhists everywhere. Tibetan Buddhism is estimated to have 18 million followers worldwide.

Mastering Meditation gives you the experience of studying with one of the greatest meditation masters of the modern age. His Eminence Chöden Rinpoché was not only a celebrated scholar, honored by selection as a debate partner to His Holiness the Dalai Lama, but he was also an accomplished yogi who spent nineteen years in solitary meditation retreat. In this thorough and thoroughly clear book, Rinpoché offers meticulous explanations and profound practical instructions on two essential practices in Tibetan Buddhism: calm abiding and mahamudra.

The first part of this book contains instructions for developing calm abiding, an unshakable single-pointedness of mind. The second part, Rinpoché’s direct commentary on the Fourth Panchen Lama’s foundational text, offers advanced instructions on using calm abiding as a platform to develop mahamudra. Rinpoché elucidates both sutra-system mahamudra—meditation on the emptiness of the mind—as well as mantra-system mahamudra, a specialized meditation that uncovers subtle, hidden levels of mind to pierce into the ultimate nature of self and reality, leading finally to complete enlightenment.

Drawing from his vast learning and personal experience, Rinpoché provides readers with an open gateway to remarkable states of lucidity and peace.

His Eminence Chöden Rinpoché: His Eminence Chöden Rinpoché was born in eastern Tibet in 1930 and was recognized as a young boy as the reincarnation of the previous Chöden Rinpoché. When he was fifteen, he enrolled at Sera Jé monastic college, where he excelled; he completed all the study necessary for the highest degree of geshé lharampa, was renowned as one of the great Tibetan teacher-yogis of our modern era, and was chosen as a debate partner for the Fourteenth Dalai Lama when His Holiness was taking his geshe exams. After the Chinese takeover of Tibet, Rinpoché entered solitary retreat, in which he stayed for nineteen years. In 1985 the Dalai Lama asked him to leave Tibet to teach in India and Nepal. He taught students in the geshé program at Sera Jé for many years, as well as offering teachings all over the world. He passed away in 2015.