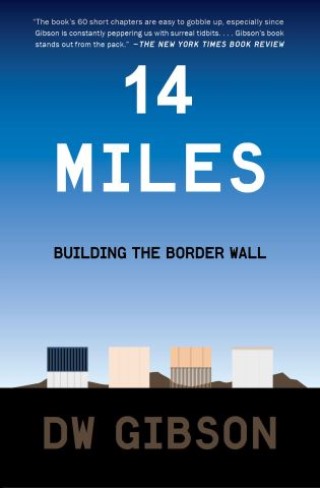 An esteemed journalist delivers a compelling on-the-ground account of the construction of President Trump’s border wall in San Diego—and the impact on the lives of local residents.

In August of 2019, Donald Trump finished building his border wall—at least a portion of it. In San Diego, the Army Corps of engineers completed two years of construction on a 14-mile steel beamed barrier that extends eighteen-feet high and cost a staggering $147 million. As one border patrol agent told reporters visiting the site, “It was funded and approved and it was built under his administration. It is Trump’s wall.” 14 Miles is a definitive account of all the dramatic construction, showing readers what it feels like to stand on both sides of the border looking up at the imposing and controversial barrier.

After the Department of Homeland Security announced an open call for wall prototypes in 2017, DW Gibson, an award-winning journalist and Southern California native, began visiting the construction site and watching as the prototype samples were erected. Gibson spent those two years closely observing the work and interviewing local residents to understand how it was impacting them. These include April McKee, a border patrol agent leading a recruiting program that trains teenagers to work as agents; Jeff Schwilk, a retired Marine who organizes pro-wall rallies as head of the group San Diegans for Secure Borders; Roque De La Fuente, an eccentric millionaire developer who uses the construction as a promotional opportunity; and Civile Ephedouard, a Haitian refugee who spent two years migrating through Central America to the United States and anxiously awaits the results of his asylum case.

Fascinating, propulsive, and incredibly timely, 14 Miles is an important work that explains not only how the wall has reshaped our landscape and countless lives but also how its shadow looms over our very identity as a nation.

DW Gibson: DW Gibson is the author of the award-winning book The Edge Becomes the Center: An Oral History of Gentrification in the Twenty-First Century and Not Working: People Talk About Losing a Job and Finding Their Way in Today’s Changing Economy. He shared a National Magazine Award for his work on an oral history of Bedford-Stuyvesant, Brooklyn. His work has also appeared in Harper’s, The New York Times, The Washington Post, The Nation, The Village Voice, and The Caravan. Gibson is a contributor to NPR’s All Things Considered and a frequent guest host for WNYC programming. He is the author of 14 Miles.