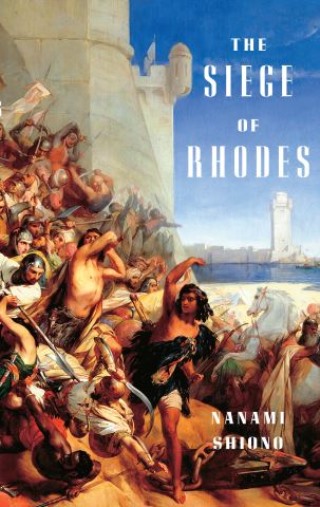 The Siege of Rhodes

By the early sixteenth century, Rhodes, the "Isle of Blossoming Roses," had become a thorne in the Ottoman Empire's side. Located only eleven miles from the coast of Asia Minor, the island was controlled by the Order of the Knights of St. John (later known as the Knights of Malta), former crusaders who by then had two specialties: tending to ailing Christians and pirating Muslim ships.

In 1522, Sultan Suleiman I resolved to put an end to it and unleashed a force of a hundred thousand troops to beseige the island. Rhodes's proximity to Ottoman territory ensured that the Turkish soldiers would be well armed, well fed, and quickly replaced if killed or injured. Facing them was a force of only six hundred knights, fifteen hundred mercanaries and three thousand native Rhodians.

In this, the second installment in The East Mediterranean Trilogy, Nanami Shiono weaves another rich and fascinating narrative around a key battle between Islam and Christendom. An inspiring portrait of nobility and courage in the face of overwhelming odds, it also offers a rare glimpse into the history of one of the most important knightly orders, one that helped establish the tradition of medical care in the West as we know it today.

Nanami Shiono: Nanami Shiono is the preeminent author of popular history in Japanese today. In survey after survey, the most powerful Japanese politicians and industrialists (many of whom she counts as personal friends) name her as their favorite author, and she enjoys a degree of influence in public discourse that few authors anywhere could hope to match. In 1970, the same year she won the first of many literary awards for her early masterpiece Cesare Borgia, or Elegant Cruelty, she moved permanently to her adopted home of Italy. Although she first rose to prominence as an author of works set in Renaissance Italy, her expertise has widened to include the Mediterranean as a whole, as well as ancient Rome (which she treats in her bestselling fifteen-volume history, The Tale of the Romans). The East Mediterranean Trilogy, completed in 1987, remains among her most enduringly popular works. The first volume, The Fall of Constantinople, is available from Vertical, and the last, The Battle of Lepanto, is forthcoming.