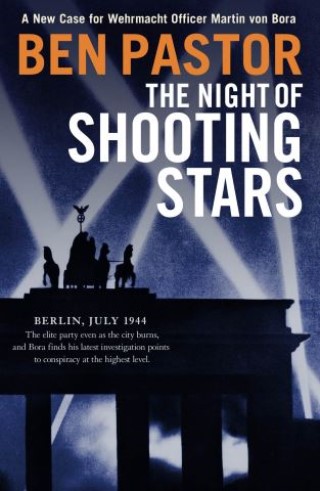 The Night of Shooting Stars

Bora is ordered to investigate the murder of Walter Niemeyer, a dazzling clairvoyant, a star since the days of the Weimar Republic. For years he has mystified Germany with his astounding prophecies. Bora’s inquiry, supported by former S.A member Florian Grimm, resurrects memories of the excessive and brilliant world of Jazz Age cabarets and locales. Around them, in the oppressive summer heat, constant allied bombing, war-weary Berlin teems with refugees and nearly a million foreign laborers. Soon Bora realizes that there is much more at stake than murder in a paranoid city where everyone suspects everyone, and where persistent rumors whisper about a conspiracy aimed at the very heart of the Nazi hierarchy. Could the charming Emmy Pletsch, who works for Claus von Stauffenberg, be a key to understanding what is going on? Bora eventually meets with Stauffenberg, facing an anguishing moral dilemma, as a German soldier and as a man. The 20 July plot and its dramatic implications as never told before.

Ben Pastor: Ben Pastor, born in Italy, lived for thirty years in the United States, working as a university professor in Vermont and has since returned to her native country. She is the author of other novels including The Water Thief and The Fire Waker (set in Roman times and published to high acclaim in the US by St. Martin’s Press), and is considered one of the most talented writers in the field of historical fiction. In 2008 she won the prestigious Premio Zaragoza for best historical fiction. She writes in English.