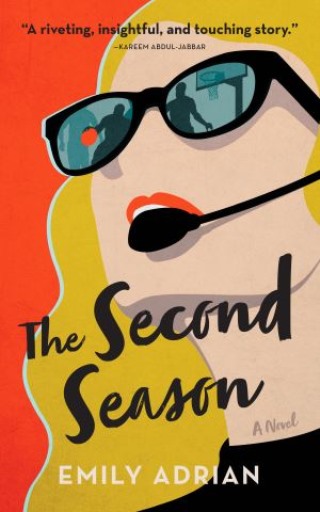 Ruth Devon starred for Georgetown Basketball back in college—until she injured her knee, married her coach, and found a new career calling games on the radio. Twenty years later, Ruth and her now-ex-husband, Lester, are two of the most famous faces in sports media. When Lester decides to retire from the announcers’ booth, Ruth goes after his job. If she gets it, she will be the first woman to call NBA games on national television.

For now, Ruth is reporting from the sideline of the NBA finals, immersed in the high-pressure spectacle of the post-season. But in a deserted locker room at halftime, Ruth makes a discovery that shatters her vision of her future. Instantly, she is torn between the two things she has always wanted most: the game and motherhood.

With warmth and incisive observation, Adrian brings to life the obsessions, emotions, and drama of fandom. The Second Season asks why, how, and whom we watch, while offering a rich and complicated account of motherhood, marriage, and ambition. Adrian’s character study of Ruth Devon illuminates a beautiful basketball mind—and the struggle of a woman who claims authority in a male-dominated world.

Emily Adrian is the author of several novels, including Everything Here Is under Control. Originally from Portland, Oregon, Emily currently lives in New Haven, Connecticut, with her husband, her son, and her dog named Hank.