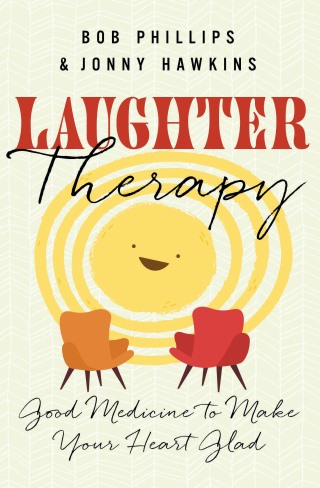 Patient: “I always feel that I’m covered in gold paint, doctor.”
Psychiatrist: “Oh, that’s just your gilt complex.”
They say laughter is one of the most effective forms of therapy. If so, who better to provide counsel than the comedic duo behind A Joke a Day Keeps the Doctor Away and Laughter Never Gets Old?

Whether you’re recovering from an illness, struggling with personal issues, dealing with a crisis, or just having a rough time, humor can be the pick-me-up you need to feel better. Brighten your day with a little Laughter Therapy!

Jonny Hawkins is a full-time cartoonist whose work has appeared in more than 600 publications. He also creates five themed Cartoon-a-Day calendars each year. Jonny and his wife, Carissa, have three children and live in Michigan.

Bob Phillips, master compiler of inspirational verses, Scripture references, and quotes on the lighter, humorous side of life, has written a hundred books with combined sales of more than 11 million copies. Bob also serves as executive director emeritus for Hume Lake Christian Camps and is a licensed family counselor in California.